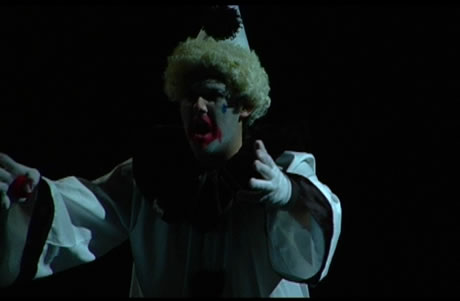 Michael Lampard, who created the role of “the Clown”.

SYNOPSIS
A man is on a telephone call, he is on hold. A clown appears, he welcomes the audience and sets the scene. The man verbalises wistfully (although unintelligibly) about the person who might one day answer the phone, he then dances, poorly. A pilgrimage of lost opera singers ambles through the theatre. A bull appears, briefly. The man becomes paranoid about his apparent abandonment by the person who refuses to answer, and goes to the fridge to get some food. A woman appears, tap dancing in terror – accompanied by glorious choral music. The Man finally returns to the table, destroyed by his efforts at the fridge. When he picks up the phone, he is still on hold, he is inconsolable. The devil appears, recites a speech about artistic mediocrity. The opera concludes with five opera singers singly loudly in an attempt to cover for the fact that there wasn’t a climax to the plot.