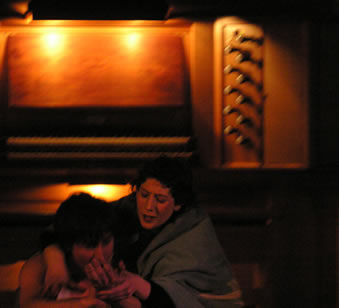 Music and Libretto by Matthew Dewey

SYNOPSIS
A priest sits beneath a large crucifix. He is quite drunk on sacramental wine. A phone call. A woman describes how her priest has been unusually grim, distracted and distant to her of late, until one night when he calls her up, and (quite drunk) asks her to come straight away to the church. The Priest Admits to God that he has fallen in love with a woman in his parish. Both a Devil and an Angel appear. He declares his guilt and states that he wishes for, but expects no mercy for forsaking his first love: God. The Woman arrives as he tries to slit his wrists – he is too drunk. He collapses in drunken exhaustion as she runs to him. She holds his in motherly embrace as the Devil and the Angel look down at him in judgment from the cross.

HISTORY OF PROJECT
This piece was written for a joint project with the Tasmanian Conservatorium and the IHOS Music Theatre Laboratory under the supervision of composers Douglas Knehans and Constantine Koukias, and director and dramaturg Robert Jarman. The project was framed within a seven month period, and involved three stages:
a) The composers were given four weeks to come up with a scenario and write the libretto (The scenario had to utilise four performers).
b) When the libretto was written and edited, there was eight weeks to compose the music and orchestrate.
c) After the score was completed, the parts were distributed to the performers and the process of rehearsals and staging commenced. The piece was premiered on the 20th of September 2004. “A Priest’s Passion” was subsequently elected for a studio recording by ABC Classic FM Radio producer Brooke Green (the only piece in this project to be accorded this honour).